Are you a boxer wanting to get into kickboxing or Muay Thai? Or perhaps you are training shadow boxing for general fitness and want to add some variety to your sessions? With Combat Go it is easy to get started. Check out our animated guide to 4 fundamental kicks. Then start practicing with our free boxing timer and combo coach.

Read on, or if you prefer, tap through the story embedded below.

If you are just getting into boxing, we suggest you start with our Getting Started with Boxing post, and then come back here for some guidance on the kicks.

Before getting into the 4 kicks, let’s work on the position of your feet and body (the STANCE) and your hands (the GUARD). A good stance brings balance, stability and readiness and the stance you need for executing kicks effectively is no different than the basic boxing stance.

Place your dominant (REAR) hand and foot at an angle to your target.

Next, raise your dominant hand near your chin with your non-dominant (LEAD) hand slightly covering your face.

For more info on positioning see our Getting Started with Boxing post.

All our instructions assume you are starting from this position. The 4 kicks we cover can be executed with either the LEAD or the REAR leg. Our animated guides show the kicks executed from an ORTHODOX stance with the REAR (right) leg.

Now let’s get to the kicks.

Low kicks can be executed with either the lead or rear leg. Its important to start the kick in a good fighting stance with your hands up in the guard position. Low kicks are mainly used to target the inner or outer part of an opponent’s thigh, and these kicks are almost always thrown as part of a combination.

To throw a low kick you’ll need to plant onto one foot and use your hips to bring the kicking leg through the movement. Its important that you stay on the balls of your feet for the planted leg and to use your arms to counterbalance the kicking leg.

Roundhouse kicks are extremely common and versatile, and like any kick they can be executed with either the lead or rear leg. It’s important to start the kick in a good fighting stance with your hands up in the guard position. These kicks can be thrown to the body or head of the opponent.

To throw a good roundhouse kick you need to start with planting and pivoting on one leg. Deliver the strike by lifting your other leg and using the knee and hip to pivot and turn the shin into the target on the opponent.

Knees are effective short-range strikes which can be devastating if landed correctly. Knees can be thrown to the body or head of the opponent.  Knees are most effective when grappling or clinching an opponent because of their short-range which makes it hard to land a knee strike without grappling or closing the distance. The straight knee most often targets the opponent’s midsection.

As for kicks, plant onto one leg and bring your opposite hip and knee in an upwards straight line towards your target. Return your stance to a fighting position with your guard up.

The front kick (also referred to as a teep or push kick) is a versatile kick which is the kicking equivalent of the jab. This kick can be used to create distance as well as deliver a significant strike as you can aim this kick to the midsection or head.

To throw a front kick, plant and drive into the ground on one leg. With the opposite leg bring your knee to your chest and extend the foot directly in front to deliver the strike on target.

There is more info on these and many more kicks in the Combat Go technique primer. This primer also covers knees & elbows, punches, footwork and defensive moves, and once you are ready you can use the free app to generate workouts to practice any of these moves.

Whether you are an experienced boxer or a beginner, Combat Go can help you learn the basics, improve your skills and get a great workout. If you have been boxing for a while you should be able to jump in and start using our web app to generate workouts for shadow boxing and bag/pad work right away. If you are new to boxing, read on for some tips on how to get started with the Combat Go app. 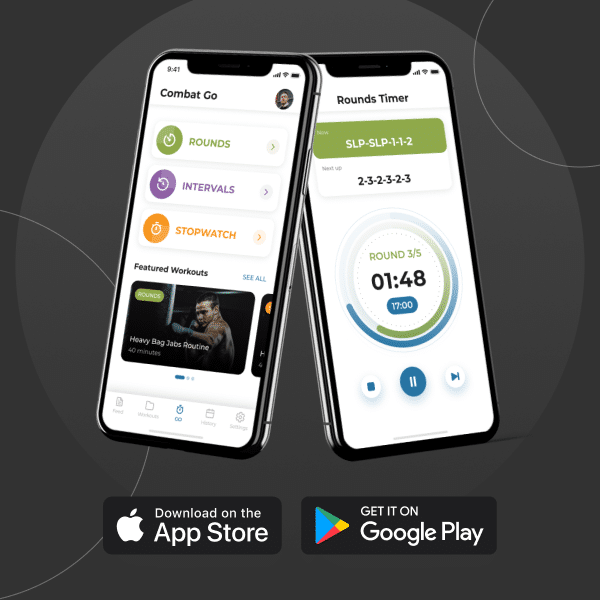